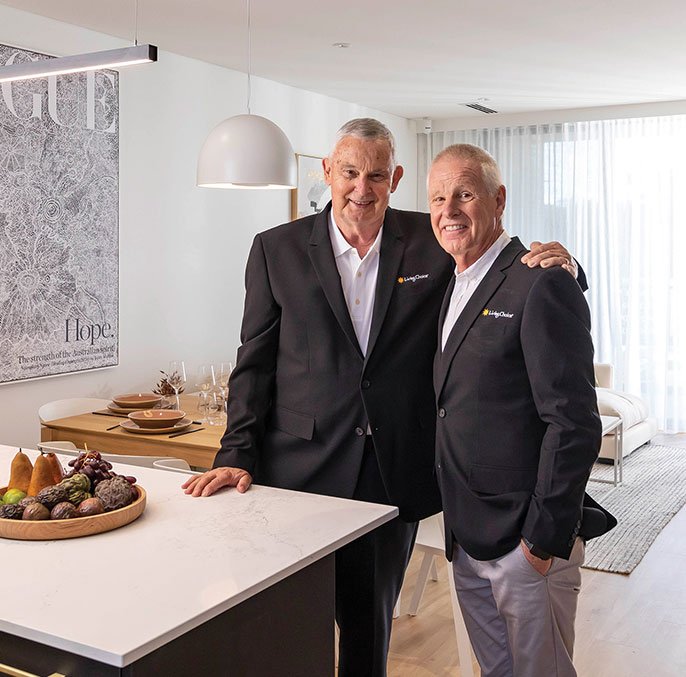 In the retirement village and hospitality industries, Living Choice is renowned for setting new benchmarks in visionary design, choice of building materials and construction excellence. Over the years, it has won several awards, including Master Builders, UDIA and Property Council of Australia awards. In February 2022, their new hotel, The Bridgeport in Murray Bridge, was named Overall Hotel of the Year – Regional at the Australian Hotel Association’s National Awards for Excellence Now it has brought the same high standard of design and building excellence to its Residential Communities division.

Ian and Graham have invested extensively in the Sunshine Coast region, having owned and operated retirement villages at Living Choice Twin Waters and Living Choice Kawana Island since 2003. In 2007, they purchased several large landholdings in Sunshine Cove, including six hectares where The Somerton Residences are now being developed, 17 north-facing waterfront lots along the lake and a large site along Maroochy Boulevard where Aldi Supermarket is now located.  They also own a 200ha parcel of land at Palmview which is earmarked for a major master-planned residential community, Flame Tree Rise.

Apart from The Somerton Residences, Living Choice Residential Communities has built The Brighton Apartments, 18 exclusive, north-facing waterfront apartments in Sunshine Cove, which opened in 2021. Living Choice’s local Construction Division has also built two premium Aged Care Residences on the Sunshine Coast for Estia Health – one at Twin Waters and one at Sunshine Cove.

Open for inspection Tuesday to Saturday 10am to 3pm.

Alternatively, send us a message via the form below and we'll get back to you.